The project will convert the canals into a covered pipe system

As work progresses over the next few months, residents will see construction crews digging ditches and laying pipes at Twisp east of the Methow River on the property north and south of the Highway 153, beginning with the Lloyd Industrial Park property.

The work is part of the $ 10 million instream improvement project that began last fall that will transform MVID’s two open canals into a pipe system, with the primary goal of leaving more water in the Twisp and Methow rivers for fish. 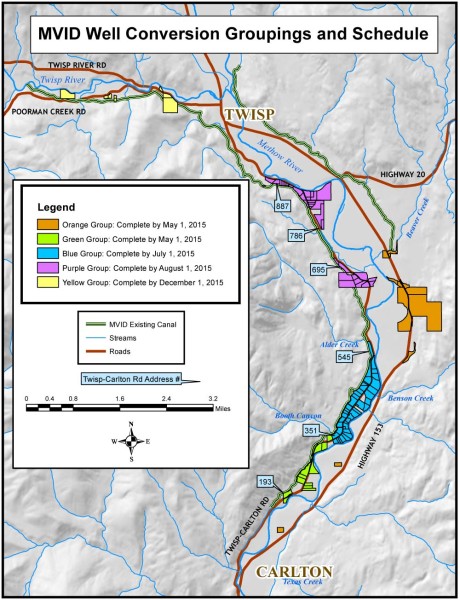 At Twisp, the new underground irrigation system will connect approximately 73 MVID customers to the new gravity-fed pipe installed last fall to replace part of MVID’s open ditch that diverts water from the Methow River near the North Cascades Smokejumper base and hauled it south to Beaver. Stream.

Approximately 9,000 linear feet of pipe at Twisp will be installed over the next few weeks by Lloyd Logging Inc., which was awarded the contract for the work.

“Some properties have never been serviced” in the area to receive new irrigation pipes, Knott said. The open-air canal system did not provide enough pressure to reach some customers in town, or the pipe system was broken, he said. New hoses are needed to handle the increased pressure of the gravity fed piping system.

The work is expected to be completed by June. MVID begins supplying water on May 1, and some MVID customers in the construction area may not receive irrigation water until the project ends in June, Knott said.

During construction, some streets in the city may be dug up, but none will be fully closed, so residents will have access to their homes and businesses, Knott said. Any damage to vegetation or property as a result of the project will be repaired, he said.

In addition to the pipeline project at Twisp, several other elements of the reserved flow improvement project are underway, Knott said.

Crews will complete work over the next few weeks on the east canal pipe, which opened last October. The pipeline carries water approximately 4.5 miles south of the industrial park to Beaver Creek and serves 253 parcels.

Areas where the pipe is still uncovered will be covered, building materials will be cleaned up and some trees will be removed, Knott said. The first application of grass seed to disturbed areas will also be made. â€œWe plan to sow several timesâ€ to restore vegetation disturbed during construction, he said.

Work will begin on March 23 to replace five lateral irrigation pipes that branch off at the bottom of the new pipe and serve MVID members south of Twisp Municipal Airport. The hoses need to be replaced because the old hoses cannot withstand the pressure of the new gravity-fed system, Knott said. Work will be completed by May 1, when the district begins providing water.

As in the city, many properties at the lower end of MVID’s east canal have not received water due to the low pressure and will be able to irrigate for the first time, Knott said. MVID members who did not receive water paid an administrative fee to be part of the district, although they did not pay for the water delivery, he said.

â€œIt’s a new ball game on the East Channel. We hope for a big improvement, â€Knott said.

Work is also underway on the canal on the west side of MVID, which diverts water from the Twisp River about three miles upstream from Lookout Mountain and carries it south to near Carlton. This diversion was the main cause of years of regulatory and legal battles between MVID and federal and state environmental agencies, which said the intake of the Twisp River damaged the habitat of endangered fish. .

The Instream Flow Improvement Project calls for the construction of an approximately 1.8 mile long pressure pipe system that will be fed by four wells dug last year in the orchard behind the Hank’s Harvest Foods market.

Work will continue this summer on well development – installing screens, pumps and constructing a building to house the system controls and fencing around the wells, said Torre Stockard, deputy project manager.

A request for tenders was recently issued for contractors to build the distribution system on the west side of MVID. The contract foresees that the installation of the pipe will begin this summer and will be completed by December.

The contractor will hook up the system to the wellfield next spring, and the new system is expected to be operational by the start of the irrigation season in May 2016, Stockard said.

When the ditch, built in the early 1900s, closes in October of this year, “this will be the last time water will flow in this ditch,” Knott said.

At the end of the project, the system on the west side of MVID will be “significantly reduced” following an order from the state Ecology Department that reduced the amount of water MVID could withdraw from rivers, Knott said.

The lower 8 and upper 3 miles of the canal on the west side will be closed and 75 clients formerly served by the canal will dig new individual wells or upgrade existing wells to provide irrigation water. Eleven members at the south end of the pipeline on the east side will also be converted to wells. All members who convert to Wells will be compensated for the cost of the conversion or upgrade.

The wells were made possible through an Ecology-approved water rights change and $ 1.3 million from the Priest Rapids Coordinating Committee, which is part of the Service District Dam mitigation funding. Grant County public authorities.

Well conversions are underway and several wells have already been drilled, Knott said. Members that convert to wells are grouped together geographically and conversions occur on a phased basis, with the first conversions being at the southernmost end of the channel and northward.

Each group has a deadline by which the canal will be closed above them and the wells must be completed or risk losing water. Any members who fail to complete their wells by Dec. 1 will not be eligible for compensation, Knott said.

The deadline for the first group at the end of the channel is May 1, Knott said. As the well completion deadlines for each group approach, “they have to crack or they are going to be left dry,” he said.

All members are being contacted by project managers about the changes and how to drill new wells, and all but about 15 have responded, Knott said. Those who did not respond are mostly absent owners or LLCs, he said.

Part of the $ 1.3 million available for wells is in a contingency fund, to address issues with inadequate well production or to correct problems if new wells impact production from neighboring wells, said Knott.

Another deadline is looming for MVID members on the West Channel. They will need to work with the project managers to identify the trees they want to keep after the canal is closed.

Plans call for the removal of all deciduous trees along the route of the abandoned canal, as water loss from the open ditch means many may die. All evergreens will be left standing, unless the owner and MVID agree they are a potential hazard, Knott said.

Homeowners will be required to sign a liability waiver accepting responsibility for any deciduous trees they wish to keep. Knott said tree removal is expected to begin in December.

The inflow improvement project is moving forward despite an appeal filed last year by Lee Bernheisel of the Okanogan Wilderness League challenging Ecology’s approval of the changes to the bypass points and the MVID water quantity authorized. That appeal is expected to be heard before the state’s Pollution Control Hearing Board this summer or fall, according to MVID officials.

â€œThe ecology has allowed us to proceed with the assumption that we will have the amount of water that MVID asks for and, if not, the system will always run with less water,â€ Knott said.